MAC address-based VLAN is a method to allow incoming untagged packets to be assigned to a VLAN based on the source MAC address of the packet. Even if the users frequently change their physical locations, the network administration won’t need to reconfigure VLANs which improves security and access flexibility on a network. The FS S3900 series switches, supporting MAC address-based VLAN configuration, are quite suitable for SMB of which physical locations change frequently while network cards are replaced infrequently, such as laptops. 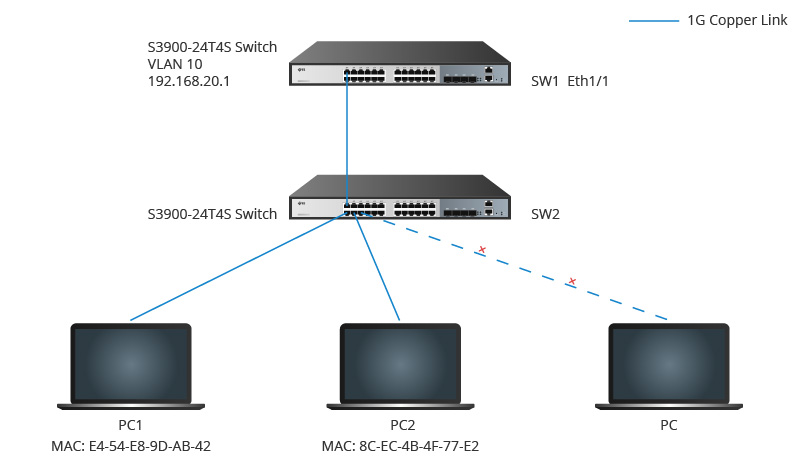 The MAC address-based VLAN configuration of S3900 series switches can be realized via CLI and web GUI interface. Here are the configuration processes via the CLI interface:

4. Configure the MAC addresses of the PC1 and PC2 and associate them with VLAN 10 (support priority setting and generally the default VLAN is 0).

5. Verify the configuration. Use ping commands to inquiry the IP address of VLAN 10 on the PC1.

Use ping commands to inquiry the IP address of VLAN 10 on the PC2.

Log in to the web GUI interface of the S3900 series switches to configure the MAC address-based VLAN for the switch. The detailed processes are listed below:

2. Enter the VLAN-MAC-Based Vlan interface and associate the MAC address with VLAN 10 in PC1. At the same time, you can choose the priority setting and generally the default VLAN is 0 (the processes of the PC2 are same to the PC1).