There are usually multiple services such as IPTV, VoIP, and Internet access using different protocols in the LAN network. To facilitate network management, services using the same protocol are classified into the same VLAN for management. Thus there will be multiple protocol-based VLANs in one network. Processing data frames based on protocols such as IP, IPX, AT, etc, protocol-based VLAN is a VLAN that can only be configured in the hybrid interface to define filtering criteria for untagged packets. This article will focus on the protocol-based VLAN configuration on FS S3900 series switches which are designed for the campus network, SMB, and home network.

The following figure shows a typical protocol-based VLAN networking application of the S3900-24T4S managed switch. In the network, Internet services are provided through IPv4 and IPv6 protocols respectively. By configuring protocol-based VLANs on FS S3900-24T4S switches, the Internet services are divided into two different VLANs——VLAN 10 and VLAN 20. In VLAN 10, end-users communicate with the Internet server through the IPv4 protocol, while in VLAN 20, users use IPv6 to communicate. 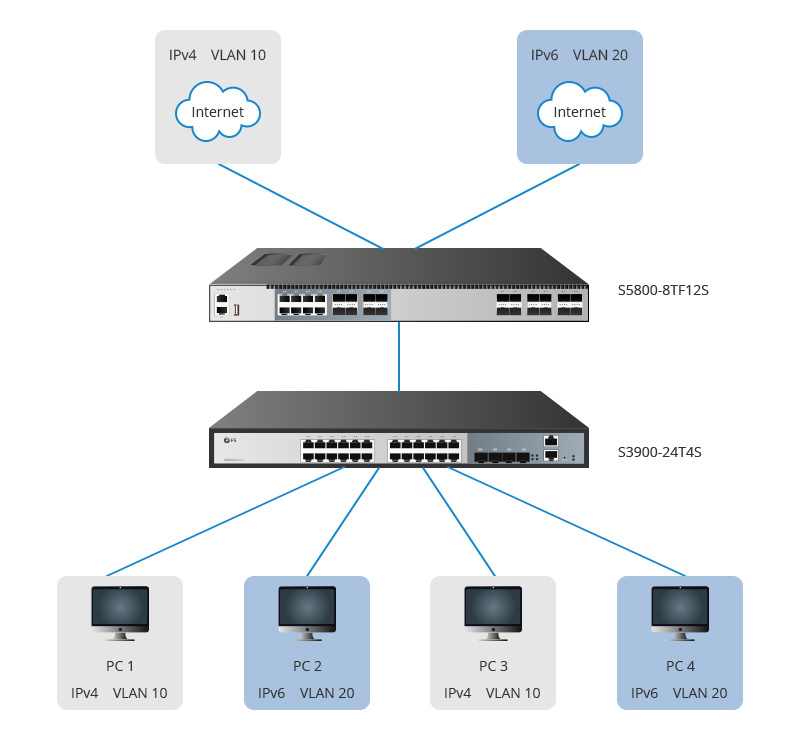 3. Configure the network protocol to associate with the corresponding VLAN.

4. Configure the eth1/2-5 port of S3900-24T4S switch as the hybrid interface and remove the corresponding VLAN tags.

5. Configure the eth1/1 port of S3900-24T4S switch as the trunk interface and allow all VLANs to get through.

7. Configure the eth2/3 port of the S5800-8TF12S switch as the trunk port and allow the corresponding VLANs to get through.