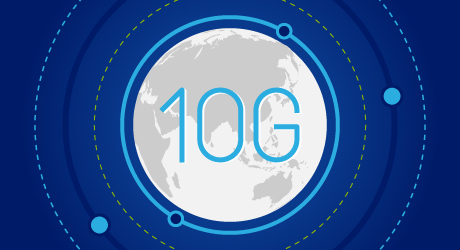 A Quick View of 10-Gigabit Ethernet

The improvements in 10GbE technology are extending its reach beyond enterprise enterprise-grade users to the broader market to replace 1 Gigabit Ethernet. This article introduces the types of 10GbE and its market requirements.

What Is 10 Gigabit Ethernet?

10 Gigabit Ethernet is a telecommunications technology that transmits data packets over Ethernet at a rate of 10 billion bits per second. 10GbE standards were first defined by the IEEE 802.3ae in 2002. To implement different 10GbE physical layer standards, PHY modules including XENPAK(and related X2 and XPAK), XFP, and SFP+ were released specified by multi-source agreements (MSAs). The sizes of these five modules are getting smaller and smaller. SFP+ is the newest module standard and has become the most popular socket on 10GbE systems.

There are two types of 10 GbE network, which differ by the type of cable used to connect devices.

There are two basic types of optical fiber used for 10 Gigabit network: single-mode (SMF) and multi-mode (MMF). In SMF light follows a single path through the fiber while in MMF it takes multiple paths resulting in differential mode delay (DMD). SMF is used for long-distance communication and MMF is used for distances of less than 300m (more information about SMF and MMF, click Fiber Optic Cable Types: Single Mode vs Multimode Fiber Cable). 10 Gigabit Ethernet can also run over active optical cables (AOC).

Optical fiber can also be divided into three types according to the application scenarios: 10 Gigabit LAN Ethernet, 10 Gigabit WAN Ethernet, and 10 Gigabit PON over Optical Fiber.

There are broad demands for 10 Gigabit Ethernet in the Local Area Network (LAN), Metropolitan Area Network (MAN), and the Wide Area Network (WAN) markets. Each market typically has different requirements for linkspan and cost.

10 Gigabit Ethernet in the LAN

10 Gigabit Ethernet in the MAN/WAN

The WAN markets typically include Internet service providers and Internet backbone facilities. A Point of Presence (PoP) is typically considered the node that links a long-distance network to a serving area, giving a service provider or enterprise a presence in the area and giving area users an economical way to access the provider’s services.

Figure 2: Example of 10 Gigabit Ethernet in a MAN

As the boundaries of LAN, MAN, and WAN continue to blur, 10 Gigabit Ethernet, providing high performance, high efficiency, and low cost at all scales, also delivers faster speeds with less compression and latency. Therefore, 10 GbE will be a low-cost solution for high-speed and reliable data networking and it will dominate the LAN, MAN, and WAN markets in the near future.

SONET vs SDH vs DWDM, What Are Their Differences?