The demand for higher network bandwidth is increasing which pushes telecom technology continuously develops, from 1G, 10G to 40G. And in recent years, 100G solution is also available which brings huge change to fiber optic networking. Based on Ethernet standards, metro network is commonly used to connect subscribers to a larger service network or the Internet. The distinct advantage of metro network is that it is cheaper and can be easily connected to the customer network. Therefore, 100G metro network becomes the focus of network engineers. However, 100G metro network is not suitable for all high-speed network.

In fact, most metro and backbone optical transport networks utilize WDM technology which supports multiple wavelengths over a single fiber. But WDM systems working at 10Gbps per wavelength have reached capacity on heavily used routes, so it is necessary to find a cost-effective way to expand the capacity. The 40G transponders and muxponders were soon developed to be used with existing WDM networks. However, 40G was not able to meet the requirement of growing data in higher-capacity WDM system. That means more channels operating at higher data rates are needed. Then, there is 100Gbps per wavelength. It is developed not only for the long haul, but also for metro networks. From the following figure, we can predict that the growth of 100G deployments in metro networks is expected to ramp quickly in the next few years. 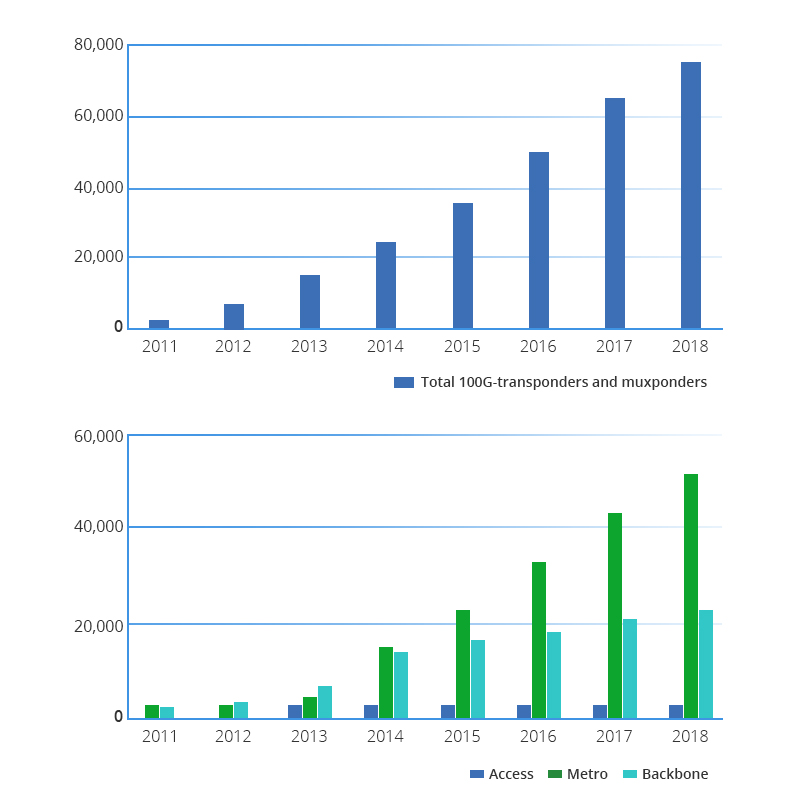 Similar to 10G networks, 100G networks begin with the use of 100G optics. On the market, there are QSFP28 including SR4, PSM4, CWDM4, LR4, ER4, etc., supporting a maximum 40km transmission distance; and 100G CFP CFP2 modules, including SR10, LR4 and ER4, are able to support transmission distances of 150m to 40km; for 100G cables, there are 100G AOC, DAC and breakout cables generally for applications of tens of meters. To satisfy the high capacity and long distance of 100G metro networks, DWDM technology is utilized and coherent CFP transceiver is deployed. While recent years, a new technology—PAM4 (Pulse Amplitude Modulation) is developed and 100G PAM4 QSFP28 transceiver is used to support 100G metro network.

Designed with a high speed digital signal processing (DSP) chip, CFP digital coherent optics (DCO) do not require separate dispersion compensation modules (DCMs). Besides, they have electronic dispersion compensation built in. Although the built-in DSP requires more power and costs more, it releases the switch vendors from adding DSPs to their equipment. Coherent CFPs can realize data transmission between sites over distance of more than 1000km.

PAM4 has four distinct levels to encode two bits of data, so 100G PAM4 QSFP28 transceiver doubles the bandwidth of a connection. In addition, customers who want to build an embedded DWDM network can use this transceiver directly in the switch. But it needs amplification to get out of the blocks and dispersion compensation to go beyond 5-6km. In general, PAM4 QSFP28 is a cost-effective solution for 100G and beyond in data center. The following figure shows the single-wavelength PAM4 modulation scheme used by 100G PAM4 QSFP28 transceiver.

Although network architecture seems to be feasible for 100G metro network, there are still many challenges.

There is still a long way to go for the implementation of cost-effective and high-performance 100G metro network. However, the challenges in network and optical areas will finally turn to reasons for the achievements in metro network development. The cost will be driven down and the applications of 100G metro will be prevalent.

The Roles of IEEE/ITU/OIF in Defining 100G Module Standards