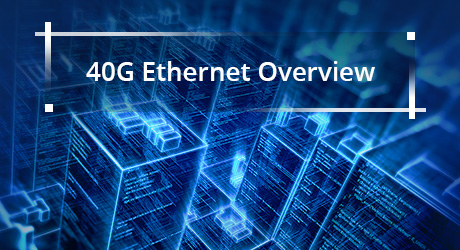 A Closer Look Into 40G Ethernet

“The higher the bandwidth, the better” has always been the wish for enterprises and individuals. Apparently, the 10 Gigabit Ethernet network can no longer satisfy the explosive network applications. Under such a trend, 40G Ethernet and 100G Ethernet almost arrived at the same time. Since the 100G market is still immature filled with uncertainties, 40G Ethernet has been preferred in most enterprise networks as an upgrading solution for their legacy 10G networks. In this post, we will take a closer look at the 40GbE network to unravel its development and fruitful results.

In 2007, the 40G Ethernet (40GbE) was first proposed as a project for higher speed Ethernet by the IEEE 802.3ba Task Force. Later in 2010, 40G Ethernet was officially approved as the IEEE 802.3ba standard. The standard enables Ethernet frames to be transmitted at a rate of 40 Gbit/s. At the same time, it addresses physical layer specifications for communication across backplanes, copper cabling, multimode fiber, and single mode fiber. With the development of 40G Ethernet, many new standards have been carried out to complement the 802.3ba standard, such as 802.3bg-2011, 802.3bj-2014, and 802.3bm-2015 standards. In the following table, the specification details of main available 40GbE related IEEE standards have been listed for your reference.

Applying the 40 Gigabit Ethernet in the network layer, it usually involves a pair of QSFP+ transceivers connected by a cable, like OM4 or OM3 fiber cable. The 40GbE transceivers, in turn, are plugged into either network servers or a variety of components such as 40Gb switches. Among all the 40G applications, 40GbE cables, 40GbE transceivers, and 40GbE switches are regarded as the top three leading 40G Ethernet-based network applications.

Currently, 40G patch cables consist of 40G Ethernet network patch cables and QSFP+ optical cables. When it comes to a 40GbE copper network, it is often rejected by many enterprise users because of its higher costs and lower scalability than a 10GbE copper network. By far, only Cat8 copper cable can be used to support the 40GBASE-T network. As for a 40G optical network, the choice for the 40G patch cable diversifies. There are 40G fiber optic breakout cables (like MTP-LC harness cables), trunk cables (like MPO trunk cables), and fiber patch cables (OM3/OM4/SMF). In most cases, these cables are in a mixed-use by enterprise users to achieve a 40G-to-40G transmission or even a 10G-to-40G migration.

Along with the 40GbE related standards made by IEEE and MSA (Multi-source Agreement), there are two major 40GbE module types in the market: QSFP+ (Quad Small Form-Factor Pluggable Plus) module and CFP (C Form-Factor Pluggable) module. QSFP+ transceiver is able to provide four transmit and four receive lanes to support 40G Ethernet applications for multimode fiber and single mode fiber. While the CFP module shows a larger size than a QSFP+ transceiver, it is often used in a 100G Ethernet network, but also supports 40GbE. Both of the two module types come with lots of different interface types. With the development of the network, 40G modules with new interfaces and standards have been coming up all the time. Here we list their main interface types for your information. To get more details about QSFP+ and CFP modules and their interface types, you can move to the post: What Is QSFP+ Module: QSFP+ Transceiver Wiki and Types.

Traditionally, the solution to combine 40G transceivers and 40G patch cables to achieve a 40G delivery is commonly used because of its flexibility. However, under the trend for higher network speed, the high-density network shows its preferences for 40G DAC (Direct Attach Cable) and 40G AOC (Active Optical Cable) that are pre-terminated with QSFP+ transceiver either on one or both ends. Especially for those data center users, short distance transmissions take the major part of the network connectivity in the data center. 40G DAC and 40G AOC are stable and cost-effective, which also can realize a 40G or 4x10G transmission with low power consumption and easy maintenance.

Although the 10G network, predicted by most IT experts, will still keep a dominating role in the Ethernet market for a long time, migration to a 40G or even higher speed Ethernet network is destined for enterprise users to keep competitive over others. With a fact that most users are still running a 1G or 10G network, a switch can handle multi-speeds are favored. Therefore, most switch vendors are offering multi-speed switches that can handle 10/25/40/100GbE speeds to meet users' current and future needs at the same time. In that way, a 40G Ethernet switch usually comes with a bunch of SFP+, SFP28, QSFP+, and QSFP28 hybrid ports. They are commonly used in data center applications as core or spine/aggregation layer switches.

Even though 40G Ethernet has been in an upward trend, the path to the next generation of Ethernet network (25G/40G/100G) is still under hot debate. No matter which solution survives, it is used to serve for a better network. The fittest, the best.