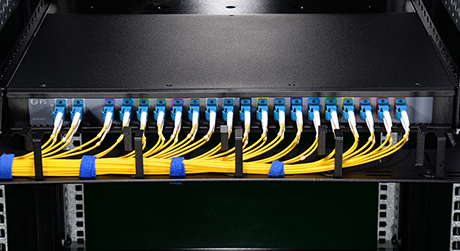 Fiber optic cabling is highly favorable in the telecommunication world. However, deploying fiber cabling for each individual service can be cost prohibitive, thus Wavelength Division Multiplexing (WDM) technology shines out as an optimal choice - it combines multiple signals onto a single fiber strand by using several wavelengths (frequencies) of light - each frequency carrying a different type of data, enabling cost-efficient upgrade of network capacity. WDM has two variations: Coarse WDM (CWDM) and Dense WDM (DWDM), in which CWDM is well suited to the needs of enterprise networks and metropolitan short distance transmission.

CWDM was standardized by the ITU-T G.694.2 based on a grid or wavelength separation of 20 nm in the range of 1270-1610 nm. It is able to carry up to 18 CWDM wavelength over one pair of fiber. Each signal is assigned to a different wavelength of light. Each wavelength does not affect another wavelength, so the signals do not interfere. Each channel is usually transparent to the speed and type of data, so any mix of SAN, WAN, Voice and Video services can be transported simultaneously over a single fiber or fiber pair.

CWDM is a cost-effective solution to provide a capacity boost in the access network. It can address traffic growth demands without overbuilding the infrastructure. For example, a typical 8-channel CWDM system offers 8 times the amount of bandwidth that can be achieved using a SONET/SDH system for a given transmission line speed with the same optical fibers. It is a perfect alternative for carriers who are looking to increase the capacity of their installed optical network without replacing existing equipment with higher bit rate transmission equipment, and without installing new fibers.

A Mux is commonly known as a multiplexer which combines multiple wavelength channels on a single fiber, and a Demux separates them again at the other end. A Mux/Demux set-up is especially useful to increase the end-to-end capacity of a deployed fiber. The Mux is typically located in the central office, and the Demux unit located in either a cabinet or splice closure from which the fibers go to their destination in a star-shaped topology.

Dual-fiber CWDM Mux Demux is a passive device multiplexing and demultiplexing the wavelengths for expanding network capacity, which must work in pairs for bidirectional transmission over dual fiber. It enables up to 18 channels for transmitting and receiving 18 kinds of signals, with the wavelengths from 1270 nm to 1610 nm. The CWDM transceiver inserted into the fiber optic Mux port should have the same wavelength as that of Mux port to finish the signal transmission. 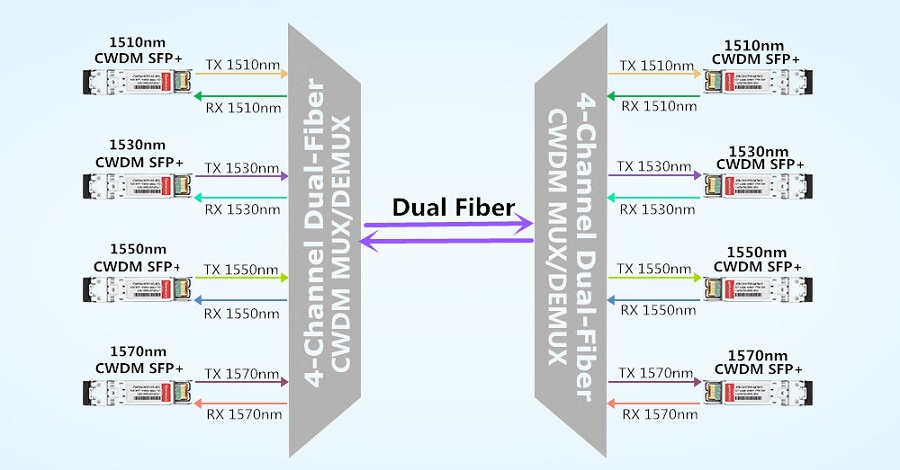 As shown in the figure below, the transmission from the left to right uses 1470 nm, 1510 nm, 1550 nm and 1590 nm to multiplex the signals, transmit them through the single fiber, and using the same four wavelengths to demultiplex the signals, while the opposite transmission carries signals with 1490 nm, 1530 nm, 1570 nm and 1610 nm over the same fiber. As for the wavelength of the transceiver, it should use the same wavelength as TX of the port on the CWDM Mux Demux. For example, when the port of a single-fiber CWDM Mux Demux has 1470 nm for TX and 1490 nm for RX, then a 1470nm CWDM transceiver should be used for TX and 1490 nm CWDM transceiver for RX. 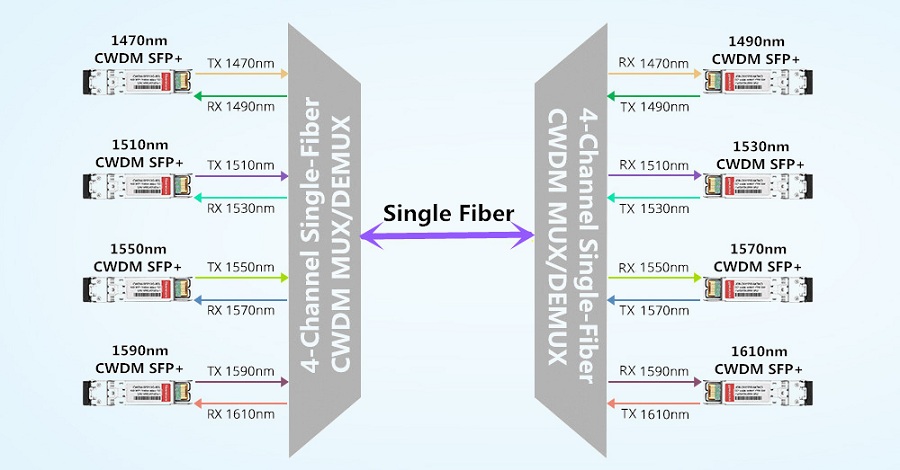 CWDM is applied primarily in two broad areas: metro and access network, performing two functions - one is to use each optical channel to carry a distinct input signal at a individual rate, another is to use CWDM to break down a high-speed signal into slower components that can be transmitted more economically, such as some 10G transceivers.

Metropolitan area network (MAN) refers to the network that covers the city and its suburbs, providing integrated transmission platform for metropolitan areas. CWDM networks enable wavelength services to be provisioned over a large metro area, with the functional and economic benefits of full logical mesh connectivity, wavelength re-use and low end-to-end latency. These features are applicable to the Inter-Office (CO-CO) and Fiber to the Building (FTTB) segments of the metro network. The low latency benefits of CWDM are especially attractive in ESCON and FICON/Fibre Channel based SAN applications. The less space, low power and cost benefits of CWDM also enable its deployment in the Outside Plant (OSP) or Remote Terminal (RT) segments of the metro market. 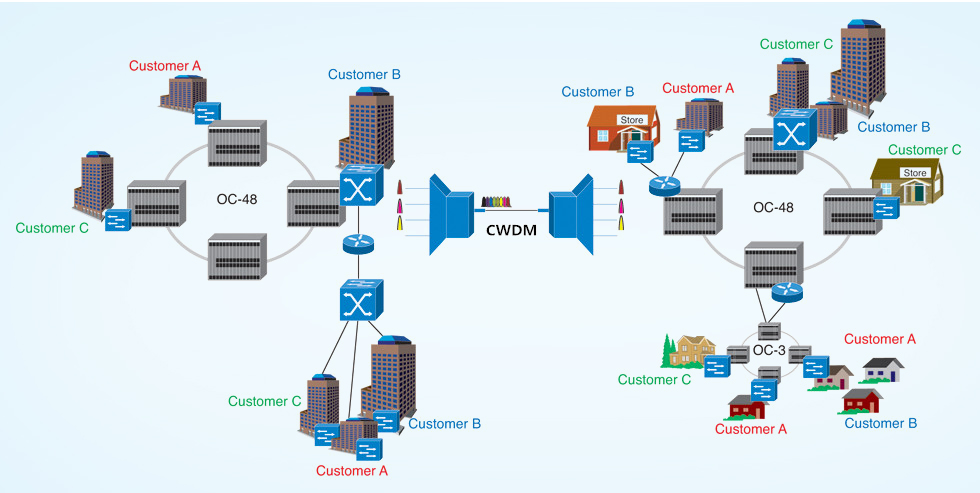 CWDM in LAN and SAN Connection

With the benefits of low implementation cost, robustly, simplicity of installation and maintenance, Ethernet has been used intensively in the metro/access system now. As the bandwidth increases, higher data rate 10 Gigabit Ethernet was put forward. Ethernet integrating with CWDM is one of the best implementing methods. In one of 10 Gigabit Ethernet standards in the IEEE 802.3ae is a four-channel, 1300nm CWDM solution. However, if CWDM were based on 10 channels of 1 Gbps, then 200 nm of the wavelength spectrum would be used. Compared with TDM (transmission time division multiplexing), 10G CWDM technology may have a higher initial cost, but it can offer better scalability and flexibility than TDM.

PON is a point-to-multipoint optical network that uses existing fiber. It is the economical way to deliver bandwidth to the last mile. Its cost savings come from using passive devices in the form of couplers and splitters, rather than higher-cost active electronics. PON expands the number of endpoints and increases the capacity of the fiber. But PON is limited in the amount of bandwidth it can support. As CWDM can multiple the bandwidths cost-effectively, when combining them together, each additional lambda becomes a virtual point-to-point connection from a central office to an end user. If one end user in the original PON deployment grows to the point where he needs his own fiber, adding CWDM to the PON fiber creates a virtual fiber for that user. Once the traffic is switched to the assigned lambda, the bandwidth taken from the PON is now available for other end users. So the access system can maximize fiber efficiency. 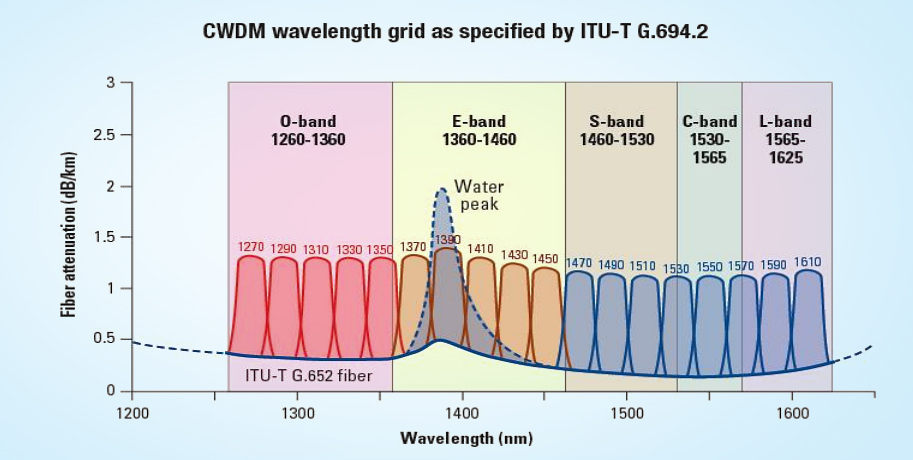 CWDM system uses the uncooled laser while DWDM system uses the cooling laser. Laser cooling refers to a number of techniques in which atomic and molecular samples are cooled down to near absolute zero through the interaction with one or more laser fields. Cooling laser adopts temperature tuning that ensures better performance, higher safety and longer life span of DWDM system. But it also consumes more power than the electronic tuning uncooled laser used by CWDM system.

The DWDM price is typically four or five times higher than that of the CWDM counterparts. The higher cost of DWDM is attributed to the factors related to the lasers. The manufacturing wavelength tolerance of a DWDM laser die compared to a CWDM die is a key factor. Typical wavelength tolerances for DWDM lasers are on the order of ±0.1 nm, while tolerances for CWDM laser die are ±2-3 nm. Lower die yields also drive up the costs of DWDM lasers relative to CWDM lasers. Moreover, packaging DWDM laser die for temperature stabilization with a Peltier cooler and thermister in a butterfly package is more expensive than the uncooled CWDM coaxial laser packing. 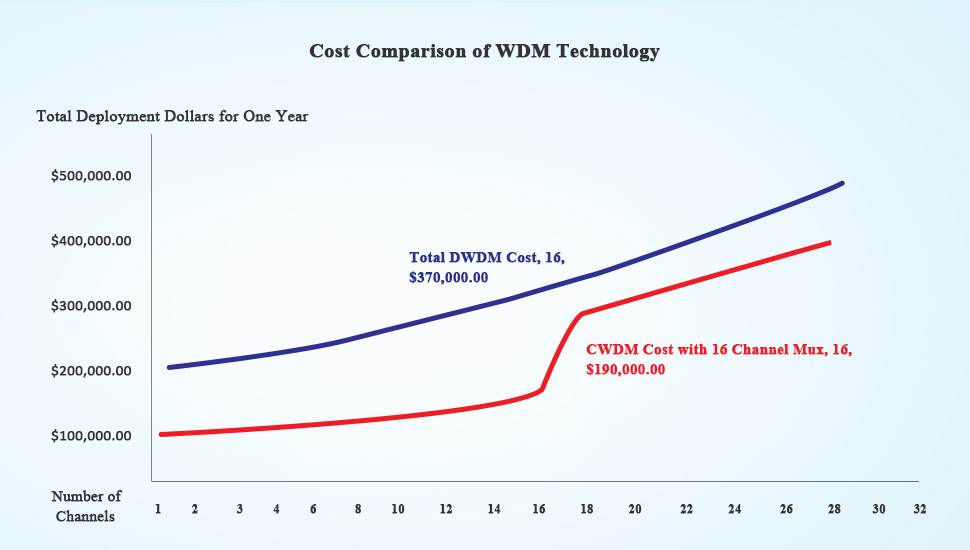 CWDM offers lower price-points as compared with DWDM and hence is extremely amenable to many cost-sensitive access and enterprise applications. In addition, CWDM is very simple in terms of network design, implementation, and operation. CWDM works with few parameters that need optimization by the user, while DWDM systems require complex calculations of balance of power per channel, which is further complicated when channels are added and removed or when it is used in DWDM networks ring, especially when systems incorporate optical amplifiers. The following table shows the comparison of CWDM and DWDM:

The Future of WDM Technology

According to the Dell’Oro Group, the wavelength division multiplexer (WDM) market revenue is forecasted to reach $14 billion by 2021 driven by the demand for 100+ Gbps coherent wavelengths. Enterprise direct purchasing for data center interconnect (DCI) will deeply influence the WDM market. DCI using WDM equipment is forecast to be a $2.4 B market by 2021. From these statistics, WDM equipment will have a good market in the near future. More recently, two new paradigmatic revolutions have made their way into the optical communication market: ROADM (Reconfigurable Optical Add-Drop Multiplexing) and Coherent Optical Systems. While these optical technologies are the perfect solutions to satisfy the growing demand for bandwidth, they also provide radical cost reduction in information transmission market.

CWDM is an attractive solution for carriers who need to upgrade their networks to accommodate current or future traffic needs while minimizing the use of valuable fiber strands. CWDM’s ability to accommodate Ethernet on a single fiber enables converged circuit networks at the edge, and at high demand access sites. With traffic demands continuing to rise, the popularity of CWDM with carriers in the access and metro networks will be akin to the popularity of DWDM in the long haul and ultra-long haul networks. In the near future, CWDM will continue to evolve into specialized applications. Combination transport and optical routers or switches are being developed now. Add-on CWDM cards are being included in more transport devices as low cost options. Suppliers are continuing to drive down costs and increase capacity.