Introduced in late 2018 and early 2019, the 400G switch entered the market and many expected that 400G would see real adoption in 2020. In fact, the data center market analyst Dell'Oro predicts that the shipments of 400G switch ports will reach 15 million by 2023. Keeping pace with this trend, many suppliers are committed to offering various 400G transceivers and MTP/MPO cabling solutions to meet the high-performance 400G network. This article will introduce 400G MTP/MPO cabling and present some of the application scenarios.

A Glance at 400G Optics and MTP Cables

Standardized by the IEEE P802.3cm Task Force, 400G-SR8 QSFP-DD/OSFP transceivers are designed to provide cost-effective short-range transmission by adopting 16-fiber parallel multimode MTP cables. In accordance with the protocol IEEE 802.3bs Task Force, 400G-DR4 QSFP-DD/OSFP transceivers adopt 8-fiber or 12-fiber parallel single mode MTP cables, which can achieve 500m reach. Unlike the previous two, the 400G-FR4 interface only utilizes 4 lasers instead of 8 lasers to multiplex them into one fiber in each direction. 400G-FR4 QSFP-DD/OSFP modules are normalized by the 100GLambda MSA to provide long-range transmission with 2-fiber single mode LC cables.

Consequently, MTP cabling is mainly used together with 400G-DR4 and 400G-SR8 optical transceivers in 400G networks, which can be further divided into 8-fiber, 12-fiber, 16-fiber SMF and MMF MTP cables types. 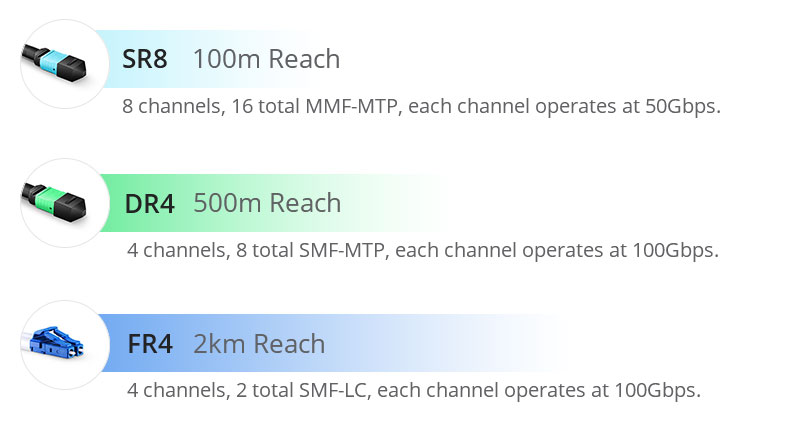 In 400G data centers, there are mainly four cabling scenarios: 400G-400G, 400G-4x100G, 400G-2x200G, and 400G-5x80G. Combining the above mentioned 400G modules with matched patch cords, a flawless direct connection or interconnection will be realized. In this section, it will focus on the direct connection MTP cabling solutions for the four scenarios.

In the backbone and some more complex metropolitan area networks, the dual-carrier technology (2x200G) will be adopted to compress the channel spacing compared to a single-carrier 400G technology. Extending the transmission distance and improving the spectral efficiency, 400G-2x200G direct connection can help to deploy 400G backbone networks with minimum bandwidth resources.

In this case, MTP conversion cables terminated with MTP connectors on both ends are needed. With this type of cable, one 400G OFSP/QSFP-DD module and two 200G QSFP56 modules can be directly connected.

The architecture of 400G-4x100G employs 4 wavelengths at 100Gbps. However, the current 100G technology is based on 4x25G design and unable to scale to 400G. PAM4 technology is adopted to achieve 100Gbps per channel, and then achieve overall 400Gbps speed by 4x100G aggregation. The MTP cables allow splitting of 400G bandwidth into multiple 100G or 40G data streams.

In the scenario of 400G to 4x100G migration, the following components can't be ignored: An 8-fiber MTP-LC cassette that packaged in the fiber rack mount enclosure is adopted to realize the transmission from MTP to LC. One 8 fibers MTP/MPO trunk cable and four LC duplex patch cables are connected on either end. 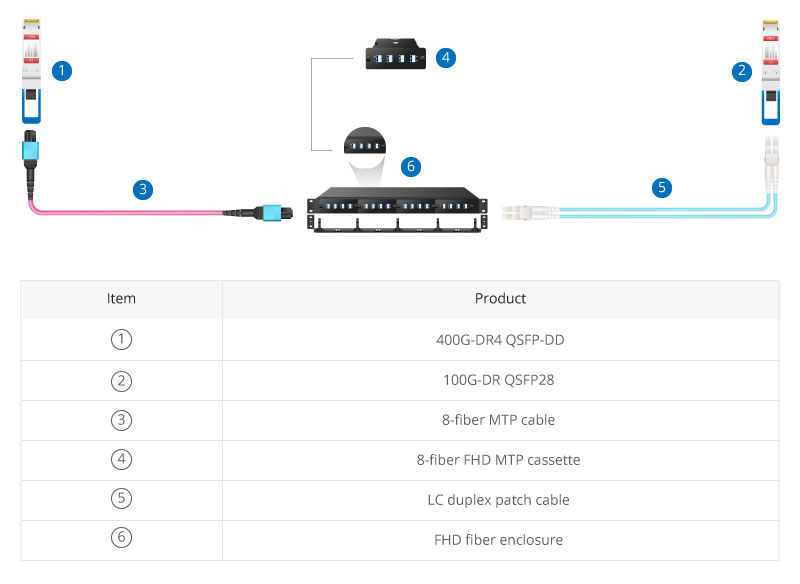 The rapid development of 400G has promoted the less popular 50G market to a certain extent because 50GbE also provides the technology to scale for the coming 400G (8x50G) network. Eight 50G lanes can support the optical link of 40Gbps aggregation via PAN modulation.

For this scenario example, the MTP cassette is in the middle to connect the 16-fiber MTP conversion cable and the LC duplex patch cords together to realize the 400G-8x50G direct connection. 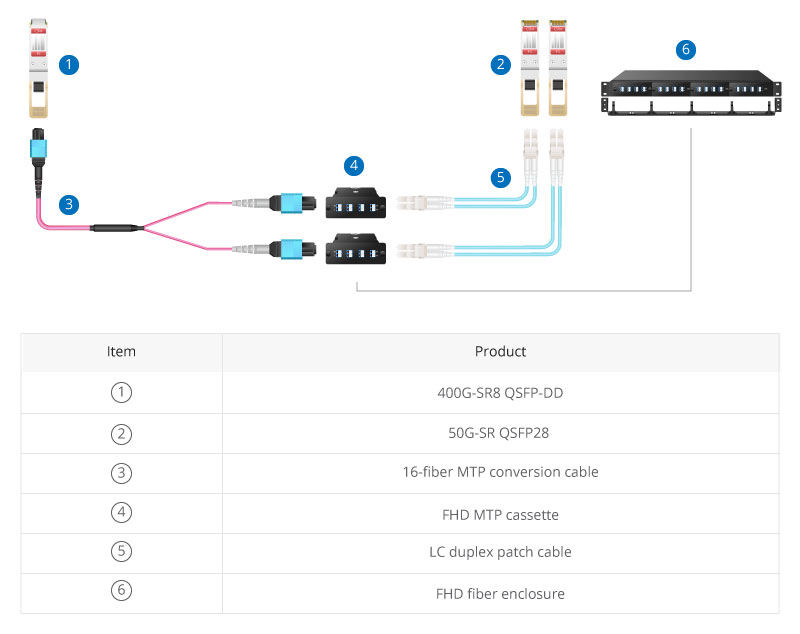 400G is increasingly becoming ubiquitous in many high-performance and high-density networking environments. With the popularization of 400G networks, MTP cabling has been widely used in data centers as a prevailing cabling solution. FS, staying ahead of the curve, has provided a wide range of relevant 400G MTP products to realize a smooth 400GbE connection or the migration of 400G-4x100G, 400G-2x200G, and 400G-5x80G.