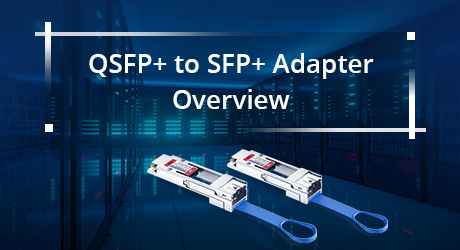 What Is a CVR-QSFP-SFP10G Module? 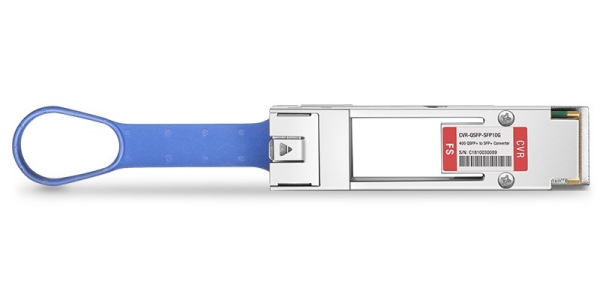 Since the CVR-QSFP-SFP10G adapter ensures smooth connectivity between 40G and 10G devices by using SFP+ based cabling, it has been considered as an effective solution for converting 40G ports to the 10G ports after launch.

CVR-QSFP-SFP10G supports all SFP+ cables and is compatible with mainstream switch models and SFP+ modules. A list of SFP+ transceiver modules that can be plugged into the CVR-QSFP-SFP10G module is provided in the table below.

Here is a typical 40G-10G application case: with the cooperation of two 10GBASE-SR SFP+ transceiver modules, an LC duplex multimode fiber patch, and one CVR-QSFP-SFP10G adapter, 40G to 10G migration will be realized smoothly.

QSFP+ to SFP+ breakout cable consists of a QSFP+ connector on one end and four SFP+ connectors on the other end. Generally speaking, QSFP+ to SFP+ breakout cable can be divided into direct attach copper cable (DAC) and active optical cable (AOC). They are used to transmit 40Gbps data into four separate streams of 10Gbps data over a fan-out cable in a point-to-multipoint configuration.

As mentioned above, we can use a CVR-QSFP-SFP10G adapter to convert a QSFP+ port to an SFP+ port. Or adopting QSFP+ to 4x10G SFP+ breakout cables to split a 40G port between a switch or a server into four 10G ports. In a word, both CVR-QSFP-SFP10G adapter and QSFP+ breakout cables are providing adaptable options for the 40G-10G transition. But what's the difference between them? The distinctions of the two solutions will be analyzed in three aspects: performance, cost, and utilization.

It's not difficult to find that a product's pricing is related to its popularity of the market to a certain extent. CVR-QSFP-SFP10G may be more expensive than expected on the market on account of the exclusive patent by some vendors. For short-reach transmission (＜10 m), DAC breakout cables provide the most cost-effective solution.

Considering the application in different scenarios, each solution has its adoptable point. If there is only one 10G device that needs to connect the switch, using a CVR-QSFP-SFP10G adapter is more appropriate. Or there are multiple 10G devices in dispersed locations that need to connect to 40G switches. In this case, CVR-QSFP-SFP10G also offers a cost-effective solution. However, if the distribution of these 10G devices is rather concentrated, QSFP+ breakout cables will be better for an optimal ROI.

All in all, with the CVR-QSFP-SFP10G module, smooth connectivity between devices that use 40G QSFP+ port and 10G SFP+ port will be realized.