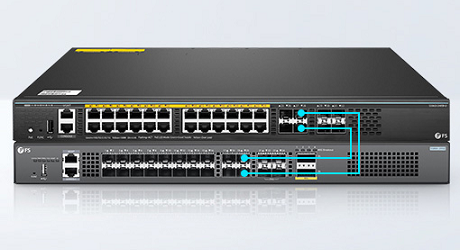 Switch Stacking vs Trunking vs Uplink: Which to Choose for Connecting Switches?

Normally, in a network system, several network switches are combined together to meet network needs (port number, certain functions, etc.) when one switch can't. There are various approaches to connect multiple switches, among which switch stacking vs trunking vs uplink are the most prevailing ones. This post aims to elaborate on the three switch connection methods and indicate which one to choose in practice.

What Is Switch Stacking?

Switch stacking is to combine multiple stackable switches via a dedicated stacking port and stack cable to operate as one logical unit and share the same IP address. Not all network switches support stacking, it depends on different brands. And stacking can be achieved only between the same switch models or the same series of a brand, like between FS S5860-20SQ switches or mixed stacking for S5860-20SQ and S5860-24XB-U switches shown in the figure below. The port density of a stack unit is the sum of the combined ports and the switching capacity will be much augmented as stacking connects the backplane of the switches thus having full backplane speed connectivity between the switches. The performance of the whole network system has been largely enhanced, so has the management for these switches. Know more information about switch stacking here: Switch Stacking Explained: Basis, Configuration & FAQs.

What Is Switch Trunking?

Switch trunking refers to a method that a network system provides network access to many switches by sharing a set of links instead of providing them individually. It is similar to the structure of a tree with one trunk and many branches. Based on layer 2 technology, trunking is often used to form internetwork including LANs, VLANs, and WANs. It enables packets encapsulated for multiple VLANs to cross exactly the same port and then retains the traffic separation among them. Just as the figure below shows, each trunk switch is configured with 2 VLANs (10 and 20). There is a single communications channel (VLAN trunk link) between the two switches, over which traffic for both VLANs can pass. In the VLAN trunking link, each switch has a port designated as a trunk port to allow data flow between these VLANs.

What Is Switch Uplink?

Switch uplink is a subjective concept which means that the cascading of ports between two switches is facilitated via a so-called “uplink port”. Uplink ports often have relatively higher data rates than normal ports and are used to connect larger networks via a straight-through cable or direct attach cable. As shown below, to build uplinks to achieve high availability for campus networks, connect the uplink port on one switch to the standard port on another uplink switch to help expand the network’s size, and a 3-layer cascading are implemented. When you connect two devices, the uplink port on only one of them is used. If you connect two uplink ports via straight-through cable, the result is the same as using two normal ports - makes the devices fail to communicate. This is where the difference between switch stacking vs cascading lies.

Switch Stacking vs Trunking vs Uplink: What Are the Differences?

The table below shows the differences among switch stacking vs trunking vs uplink.

Switch Stacking vs Trunking vs Uplink: Which One to Choose?

Switch stacking vs trunking vs uplink, which one to choose depends on your real needs. In general, switch stacking offers more bandwidth while simplifies network management, proven as a more cost-effective alternative to chassis-based higher-end switches. Switch trunking is a great option for inter-network including LANs, VLANs, and WANs, which requires network integrity as well as retains the traffic separation. Switch uplink is preferred when you want to upgrade your network while leveraging the existing infrastructure. For example, in the network application of 10G-to-40G, you can connect the QSFP+ uplink port on a 10GBase-T switch to a 40G switch in common cases.

How to Connect Multiple Ethernet Switches

MLAG vs. Stacking: What Is Your Option?

MLAG vs. Stacking vs. LACP