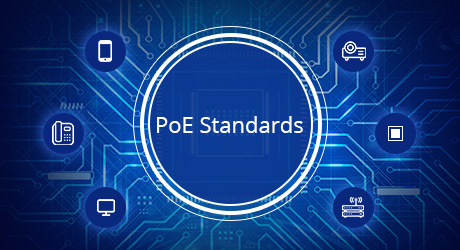 PoE (Power over Ethernet) technology allows PSE (Power Sourcing Equipment, such as a PoE switch) to use Ethernet cables to deliver both power and data simultaneously to PD (Powered Device, like IP cameras and VoIP phones), which can simplify cabling installation and save cost. Different PoE standards like IEEE802.3af, 802.3at and 802.3bt are released by IEEE (Institute of Electrical and Electronic Engineers) to regulate the amount of power delivered to those PDs. Then how much do you know about those PoE standards? How many PDs can be connected to a PSE based on different PoE standards? Here offers a detailed explanation.

At present, PoE standard is available in three types: IEEE 802.3af, IEEE 802.3at and IEEE 802.3bt. Those PoE standards define the minimum power that PSE can source and the maximum power that the PD will expect to receive. Actually, PoE technology has been around since 2003. IEEE 802.3af is the first PoE standard to be introduced. Its 15.4W power output is sufficient for most IP phones and access points. But with technology develops, many devices like IP video phones require more than 13W for the intended applications. For that reason, IEEE 802.3at was released in 2009, specifying 30W per port on a PSE. Today, there’s a demand for even higher power to support devices like PTZ IP cameras and POS terminals. Thus, the new IEEE 802.3bt was developed in 2018 and increased the maximum PoE power output to 60W or 100W per port. The detailed information of the three PoE standards will be introduced as followed.

IEEE 802.3af is also known as standard PoE with supply voltage of 44-57V, and supply current of 10-350mA. In this standard, the maximum power output of a port is limited to 15.4W. However, some power will be lost on the Ethernet cable during the transmission. Thus, the minimum guaranteed power available at the PD is 12.95 watts per port. It can support VoIP phones, sensors and so on.

The updated IEEE 802.3at standard also named PoE+, which is backward-compatible with standard PoE. The supply voltage of PoE+ ranges from 50V to 57V, and the supply current can be 10-600mA. It provides up to 30W of power on each port of a PSE. Due to power loss, the minimum output power assured on each port is 25W. This type can support devices that require more power like LCD displays, biometric sensors and tablets.

IEEE 802.3bt is the latest PoE standard that defines two types of powering/wattage standards - Type 3 and Type 4 in the table above. They will increase the maximum PoE power by delivering more power through two or more pairs of Ethernet cables. In Type 3 and Type 4 modes, PSEs will identify the PDs and set the power accordingly to the maximum PD power, resulting in a better power-delivery system.

Type 3 is also know as PoE++, which can carry up to 60W for each PoE port (minimum power ensured on each PD port is 51W) over a single RJ45 cable to power devices like videoconferencing system components.

Type 4 is named higher-power PoE. It can supply maximum power output of 100W on each PoE port (minimum power ensured on each PD port is 71W), which is suitable for devices like laptops or TVs, etc. Both the two modes of IEEE 802.3bt are backward compatible with 802.3af and 802.3at. The following table concludes the specifications of the PoE standards.

How Many Devices Can be Connected in A PoE System?

IEEE 802.3af and 802.3at are the most common PoE standards that a wide majority of PoE devices can support. IEEE 802.3bt has been newly released, which is not in large-scale use. Only a few vendors’ products support this standard. But note that, this device requires a special PoE adapter for power supply. Therefore, we just discuss PoE wattage of IEEE 802.3af and 802.3at here.

As described above, standard PoE can supply maximum power output of 15.4W, while PoE+ is 30W. When a plan calls for multiple devices that to be connected to one PoE/PoE+ switch, it’s necessary to ensure the total wattage the devices require can not exceed the amount of power that the switch can supply. Here takes FS S1400-24T4F PoE/PoE+ switch as an example. It’s a managed switch with 24 RJ45 ports and 4 SFP ports. It complies with IEEE 802.3af/at with a max power consumption of 400W. This means the 24 port switch provides the availability of PoE and PoE+ power. Therefore, this switch can simultaneously connect 24 (15.4W×24=369.6＜400W) devices with PoE standard. And it can support 13 (30W×13=390W＜400W) devices with PoE+ standard.

Follow the PoE standards for higher security and better ability to connect and communicate with PoE devices, FS has released a series of PoE/PoE+ switches, supporting 10/100/1000Base-T and 10G transmission rate. They are available in 8/24/48 ports options. The switches use plug-and-play design, supporting layer 2+ switching features like O-ring, Port-based VLAN etc. They also offer advanced management like WEB, CLI, TELNET, SNMP. FS Poe/PoE+ switches can power any 802.3af or 802.3at device of the market, making them the most flexible and secure PoE switches out there. The following table lists the specifications of FS PoE/PoE+ switches.