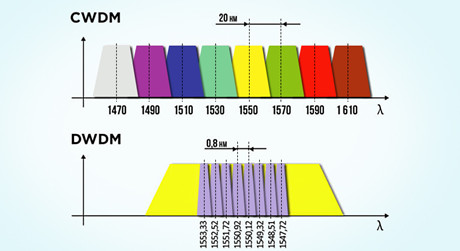 ITU-T G.694.2 defines 18 wavelengths for CWDM transport ranging from 1270 to 1610 nm, spaced at 20 nm apart. The complete CWDM grid is shown below. Each CWDM channel is transparent to the speed and type of data, meaning that any mix of SAN, WAN, voice and video services can be transported simultaneously over a single fiber or fiber pair.

In addition to the various CWDM/DWDM transceivers, FS also provides a wide range of CWDM/DWDM Mux/Demux modules, which acts as the major building block in network expansion and upgrade. FS CWDM/DWDM Mux/Demux comes in several different types in regard to line type, channel number, and special ports.

DWDM is used in long haul networks to help alleviate fiber exhaustion and the costs involved in running new fiber. Each DWDM channel can transport up to 100G, and distances over 1000 kilometers can be achieved with the use of optical amplifiers.