Stand-alone switches are commonly used to build small business networks. However, when handling burgeoning networks, you may find that managing individual switches and adding new switches is a complex process. In this case, you may consider implementing the stackable switch to simplify and increase the capacity of the network. Then what is a stackable switch and how to stack multiple switches together? Here will take FS S5900-24S stackable 10GB switch as an example to discuss these topics. 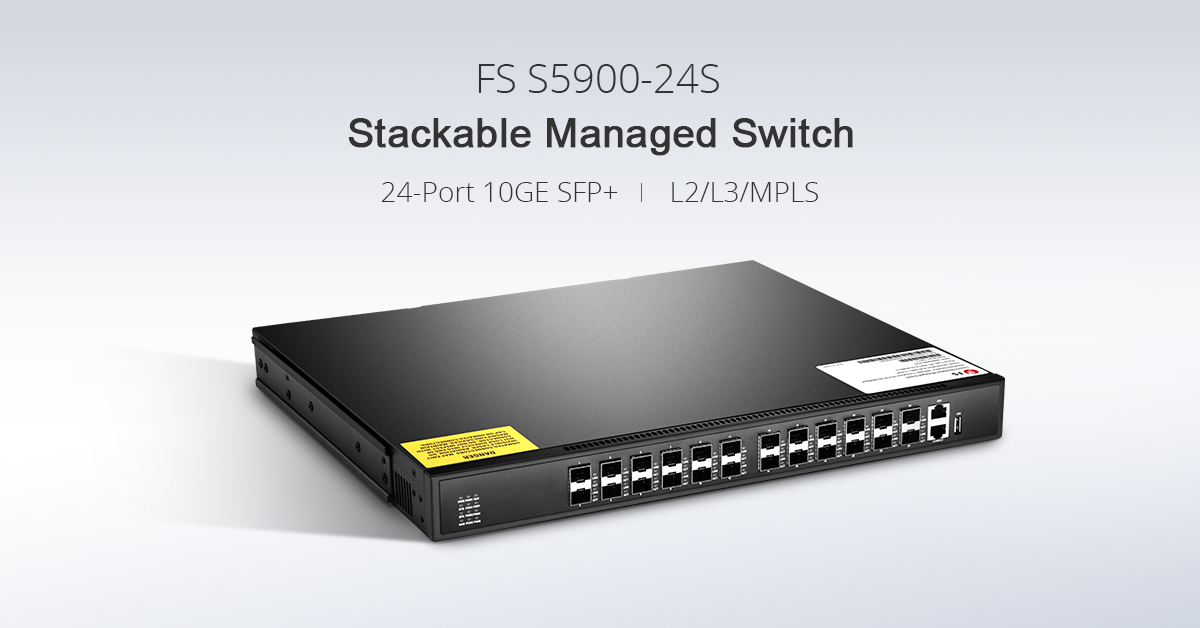 What Is A Stackable Switch?

Stacking a group of network switches can not only simplify management but also enhance switching capacity. The switching capacity or the port density of a stack is the sum of the combined switches. For example, when you stack four 24-port switches, you will get one large 96-port switch when it comes to configuration. All these switches in the stack share a single IP address for remote administration instead of each stack unit having its own IP address.

FS S5900-24S with 2 hot-swappable redundant power supplies offers high availability redundancy across the stack. It has up to 480Gbps switching capacity and backplane capacity. Hot-swap fans are built in to provide cooling to the whole stacking system and ensures seamless continuity. Besides, the IPV4/IPV6/MPLS line speed forwarding capacity of this switch can provide the unique and numerical IP addresses necessary for Internet-enabled devices when stacking multiple switches.

How to Achieve Switch Stacking With FS S5900-24S Stackable Switch?

There are two methods to stack multiple network switches into a group. For stackable switches with dedicated stacking ports, we can use a stack cable to realize stacking among them. But only approved cable can be used as stack cable, or else it would cause damage to the switches. The other way to achieve switch stacking is to use the uplink ports on the switch. Today’s stackable switches in the market can be stacked using several types of Ethernet ports including 10GBASE-T copper port, 10G SFP+ fiber port and 40G QSFP+ port as an uplink. Taking FS S5900-24S stackable managed switch as an example, it comes with 24 10GbE SFP+ ports, 1 console port and 1 Aux port. As shown in the figure below, S5900-24S supports true stack of up to 4 switches of the same model in a stack. Each 10G SFP+ port on one switch is used as an uplink port to connected to the SFP+ port on the other switch in this stacking system. This process is repeated until four models are linked together. And the first stackable switch is connected with the last one to complete the stacking topology. Every time you stack a switch in this process, certain configuration changes are applied across the whole stack. You can manage all these switches that are connected to the main switch from the console port, or make some changes to any of the switches in the stack.

Here we list some frequently asked questions about FS S5900-24S stackable switch in order to get a better idea about stacking multiple network switches and its advantages.

1.Can I create multi-link aggregation with FS S5900-24S stackable switch?

FS S5900-24S supports stacking but it doesn't support multi-link aggreation (MLAG). MLAG and stacking are two different concepts. MLAG is the ability of switches to appear as a single switch at layer 2, so that bundles of links in the form of MLAG can be diversely connected to each switch and appear as one. While in stacking, independent keep alive link between the switches.

2.What is stack member and stack master?

3.How the IP address is managed for individual switch in the stack？

The stackable switch play as a pay-as-you-grow solution to achieve super high availability and increased capacity for network expansion. FS S5900-24S stackable managed switch is fully functional. It can not only operate as standalone but can also be used together in a stack. As the core of network that serves business-critical data and applications, the FS S5900-24S provides the performance and resilience your business needs while reducing cost and complexity. With high performance business forwarding capacity and rich L2/L3/MPLS features, it is absolutely a perfect and affordable option for your network expansion.