A passive optical network (PON) is a telecommunications technology used to provide fiber to the end consumer domestically and commercially, which is often referred to as the "last mile" between an ISP (Internet Service Provider) and the customer. This PON architecture is increasingly becoming popular for its efficiency and cost-effectiveness compared to copper networks. PONs with multiple FTTx applications are changing the landscape of communications technology and IT infrastructures. This article will give you a comprehensive tutorial about the passive optical network.

What Is Passive Optical Network?

A passive optical network is a kind of fiber-optic network in form of a point-to-multipoint topology, utilizing optical splitters to deliver data from a single transmission point to multiple user endpoints. It's used to transmit signals simultaneously in both the upstream and downstream directions to and from the user endpoints.

"Passive" indicates the unpowered condition of the fiber and the splitting/combining components. Thus, what distinguishes a PON from other network structures, like AON vs PON Networks, is that the PON network uses no electrically powered equipment in its path. Since it's not vulnerable to electromagnetic interference compared with the copper network, it will preserve signal integrity well over the planned distance, making the network more reliable in actual practice.

What Technology Does PON Adopt?

The innovative wave division multiplexing (WDM) is adopted to separate data streams based on the wavelength (color) of the laser light in the PON operations. One wavelength is for downstream data transmission while another carries upstream data. These dedicated wavelengths vary depending on the PON standard in use.

Time-division multiple access (TDMA) is another technology applied to allocate the upstream bandwidth to each end-user for a specific time period, which will help to prevent the data collisions at the PON splitters or the terminal when multiple devices transmitting data upstream at the same time.

What Is Passive Optical Network Architecture?

A PON system consists of an optical line terminal (OLT) at the service provider's central office and a number of optical network units (ONUs) or optical network terminals (ONTs) near end users, with an optical distribution network (ODN) between the OLT and the ONUs/ONTs.

"Point-to-multipoint" (P2MP) is one of the distinct characteristics that a passive optical network possess, which means a single optical fiber is used to serve multiple endpoints. A PON does not have to provision individual fibers between the hub and customer, which largely reduces the amount of fiber and central office equipment compared with point-to-point architectures.

The aforementioned optical fiber and splitters are truly "passive" in the PON network without requiring electrical powering. Besides these passive components, active end devices are also required to realize the PON network deployment.


ABC of PON: Understanding OLT, ONU, ONT, and ODN will further illustrate the functions of these components in the PON network.

PON network topology has continued to develop in the past decades. The former passive optical network types have gradually been suppressed by the advanced latecomers like GPON and EPON. The major PON types are illustrated as follows:

APON, "A" stands for "ATM" (Asynchronous Transfer Mode), is the first PON system that achieved significant commercial deployment with an electrical layer built on ATM. Adopting WDM for downstream transmission, the BPON (Broadband PON) is the improved version APON, which adds dynamic bandwidth distribution, protection, and some other functions. BPON is more common than APON nowadays, which provides services such as Ethernet access, video transmission and high-speed leased lines.

GPON (Gigabit PON) is based on the ITU-T standard for the new generations of broadband passive optical access. Providing a high-bandwidth downlink rate of up to 2.5 Gbps, the asymmetric features of GPON can meet the broadband data services market demand. As a carrier-grade technology standard, GPON also provides access network-level protection mechanism and full OAM functions, which has been widely deployed in FTTH networks.

EPON (Ethernet PON) adopts Ethernet packets instead of ATM cells and has been developed for seamless compatibility with Ethernet devices. Based on the IEEE 802.3 standard, EPON needs no additional encapsulation or conversion protocols to connect to Ethernet-based networks, applying to both the upstream and downstream data transfer directions. Conventional EPON can support symmetrical speeds of up to 1.25 Gbps upstream and downstream. GPON vs EPON will make a comparison between the two mainstream choices—GPON and EPON in view of data rate, split ratios, layering & access service, QoS, OAM, costs, etc.

The 10G version of G-PON is known as XG-PON, which supports 10 Gbps for downstream and 2.5 Gbps for upstream. Although the physical fiber and data formatting conventions are identical to the original G-PON version, the wavelengths are adjusted and much like 10G-E-PON (1577 nm for downstream and 1270 nm for the upstream), enabling the same PON network to be used for both GPON and XG-PON simultaneously.

The enhanced version 10G-E-PON standard increases speeds to 10 Gbps both upstream and downstream. It operates at different wavelengths to E-PON using 1577 nm downstream and 1270 nm upstream, which enables the same PON to be used for both E-PON and 10G-E-PON simultaneously.

NG-PON2, or Beyond XG(S), utilizes WDM with multiple 10G wavelengths to deliver 40 Gbps service for upstream/downstream. Similarly, NG-PON2 that uses different wavelengths also allow the coexistence on the same PON network. GPON, XG-PON, and NG-PON2, these high-speed PON solutions will play an important role in large multi-tenant or business client settings and as part of wireless 5G networks. 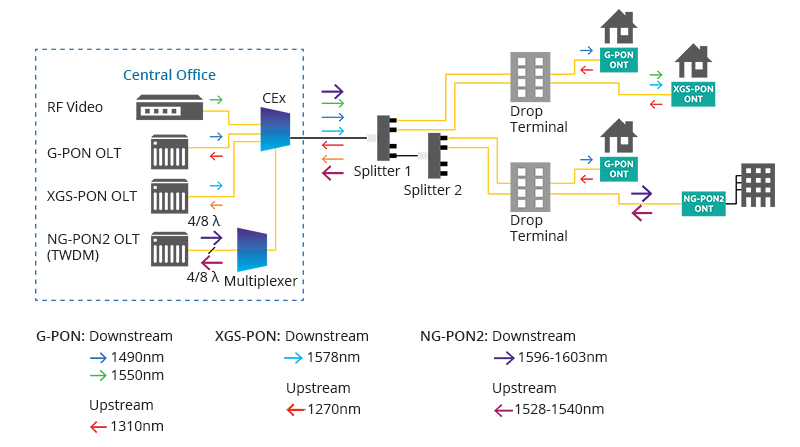 Evidently, the most prominent advantage of the PON network is the elimination of the outdoor active devices—All the signals processing functions are completed in the switches and the user premises equipment. However, there are still some drawbacks to adopting a passive optical network.

Fiber-to-the-home is regarded as the major application for PON. The reduced cabling infrastructure and flexible media transmission attributes of passive optical networks have made it an ideal fit for home Internet, voice, and video applications. Besides, the PON network is also suitable in different environments like college campuses and business complexes.

PON networks also have potentials for the 5G fronthaul applications—deploying PON networks to complete the fronthaul connections can reduce fiber count and improve efficiency without compromising performance, meeting the bandwidth and latency demands imposed by 5G.

The "part" between the backbone network and the local area networks is a concern in most cases. This "last mile," mentioned in the introduction part, is a bottleneck that necessary to break. It is as if in a national highway system, trunk and regional roads have been built in the broad high-grade highway, but leads to the families and businesses of the door was still a narrow winding path, the efficiency of the road network cannot play. Passive optical networks possess superior advantages with respect to speed, energy consumption, reliability, and the cost of deployment can break the bottleneck and provide cost-effective solutions.