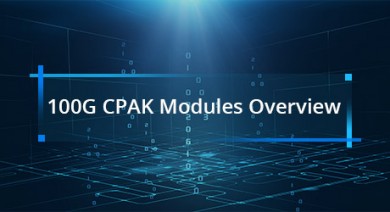 Will CPAK Optical Transceiver Still Be Popular in the Future?

What Is 100G CPAK Optical Transceiver?

CPAK is a proprietary 100G form factor from Cisco, but it incorporates IEEE standard interfaces available in several different types: 100GBASE-SR10, 100GBASE-ER4L, 100GBASE-LR4, 10x10G-ERL, 10x10GBASE-LR, which can support 100G connections with a variety of distance and fiber type requirements. CPAK transceivers can support 10 X 10 Gbps and 4 X 25 Gbps mode for an aggregate of 100 Gbps data rate. It can also operate high-density 10G breakout with MPO-24 cables. CPAK 100G optical module can be plugged into the CPAK ports of Cisco switches and routers. And one of its most unique advantages is the application of CMOS photonics, which makes CPAK a higher port density. Cisco CPAK modules combine the greatest density and bandwidth with the lowest power consumption available in the market before the emergence of QSFP28. The following table shows detailed information on different types of Cisco CPAK transceivers.

What Are the Features and Benefits of CPAK?

The most unique feature is that CPAK transceiver is the first 100G optical module using CMOS photonics which bring extremely efficient low-power optical circuits. CMOS photonics, also called silicon photonics is a technology that can control the flow of photons in place of electrons by integrating multiple circuit components in a highly efficient design, and then printing entire circuits directly on silicon wafers to produce optical devices. Hence, the 100G CPAK transceiver utilizing CMOS technology has a smaller footprint but higher port density, which enables extremely efficient, low-power optical circuits.

CPAK accommodates a variety of distance and fiber type requirements. The distance varies from 70 m for CPAK-100G-SR10 to 25 km for CPAK-100G-ER4L and CPAK-10X10G-ERL. For connectors and cabling, CPAK can be compliant with dual SC/PC connector, dual LC connector, 24-fiber MPO/MTP connector and 24-fiber MPO/MTP connector. CPAK also has strong interoperability. Generally, different 100G module types can communicate with each other under the same standard and the same speed rate. For example, 100GBASE-LR4 whether from CFP/CFP2/CFP4 or CPAK will be inter-operate.

CPAK was released right after CFP2. Although CFP is the pioneer in 100G optics, its big size can not meet the demands of the high-density data center. Therefore, CFP2 and CFP4 with more compact sizes are developed. When comparing CPAK with CFP modules, CPAK transceivers are less than one third the size of CFP modules, and dissipate less than one third of the power. In a comparison with CFP2 modules, CPAK optical transceivers are 20% smaller and consume 40% less power. In other words, if you use CPAK other than CFP2 modules in your data center switches, it can offer 20% greater port density and front-panel bandwidth. But it is a little higher than CFP4 and QSFP28.

What Are the Comparisons of 100G CPAK and QSFP28 Transceivers?

Today, there are many different 100G transceiver options with a range of form factors, including CFP, CXP, CPAK, CFP2, CFP4, and QSFP28. The following table shows their differences.

Here, we mainly focus on the differences between CPAK and QSFP28.

QSFP28 optical transceiver, due to its smallest form factor and lowest power consumption, is regarded as the most promising 100G optical module. In terms of the form factor, QSFP28 is more compact than CPAK modules. As to the power consumption, the Cisco CPAK 100GBASE-LR4 module supports link lengths of up to 10 km over standard single-mode fiber with SC connector with a nominal power consumption of less than 5.5W. QSFP28 100GBASE-LR4 supports up to 10km and consumes nearly 3.5W. CPAK optics obviously don’t have a shot when competing with QSFP28 optical transceivers.

What Is the Future of CPAK?

CPAK transceiver definitely stands for an important advancement in optical networking. With its proprietary CMOS photonics technology, the biggest benefit is that it delivers particularly high port density and front panel bandwidth. Cisco and its compatible vendors have also designed switches with CPAK ports. Under this situation, it seemed that this kind of 100G module could have been likely to stand out among other form factors in the past several years before the emergence of CFP2/4 and QSFP28.

However, in such a fiercely competitive market environment, it is hard to say which product will maintain popularity for a long period. After all, technology decides everything. Today, it comes out that CPAK is not irreplaceable any more. Perhaps it has gradually lost its attraction for these years. So far, the biggest challenge to win the market comes from QSFP28 transceivers that have delivered fabulous results in developing 100G networks. QSFP28 has smaller size and lower power consumption, making it the most popular product in the market. The utilization rate of CPAK has greatly decreased, but it is still irreplaceable for some old equipment.

Nowadays, 100G transceiver technology is gradually becoming matured. 100G CPAK transceiver module is popular for its smaller size and lower power consumption. However, when competing with open source 100G products (CFP/CFP2/CFP4/QSFP28), CPAK cannot be the ideal one for 100G high-density connectivity. CXP, CFP, CFP2, CFP4, QSFP28 also offer good selections for customers and are the mainstream in the market.