How to Install and Remove SFP Transceiver Modules?

We know that any non-standard operation may result in implicit damage or even permanent failure.

The installation and removing of SFPs are quite simple. However, you might need to refer to the datasheet or user manual of any new transceivers to familiarize yourself with its properties and the latching mechanism.

Before Installing or Removing the SFPs, You Should Remember These General Rules

Check "The Main Causes of SFP Module Failures" Part from Why My SFP Transceiver Isn't Working?

Preparing to Install or Remove a Transceiver Module

Besides SFP+, SFP, QSFP, SFP28, QSFP28 modules are all referred to as pluggable port modules. All of these modules' installation and removal can follow these simple steps.

Understanding the TX/RX Optical Power on the Transceiver


How to Troubleshoot A Fiber Optic Transceiver?

Transceiver modules come with different characteristics and they can use four different latching mechanisms: mylar/pull tab latch, bale-clasp latch, slide tab latch, and actuator button latch. And devices can have different module socket configurations. It is possible to have either a latch-up or a latch-down orientation. So, make sure that you are installing a module with the correct latch orientation for your device. 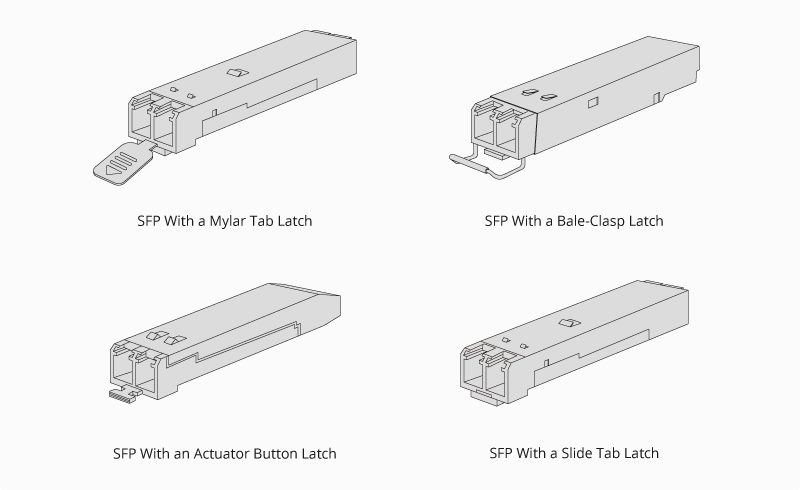 The removal of the transceivers should be operated according to different latching mechanisms:

For a mylar/pull tab latch transceiver

For a bale-clasp latch transceiver

For an actuator button latch transceiver

For a slide tap latch transceiver