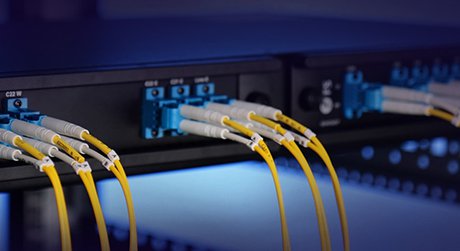 The enormous growth in the demand for bandwidth is pushing the utilization of fiber infrastructures to their limits. To fulfill this requirement, optical add-drop multiplexers (OADMs) were introduced in metro/access networks, serving as the simplest elements to introduce wavelength management capabilities by enabling the selective add and drop of optical channels. Since the OADM is based on low-loss, low-cost passive devices and does not need any power supply, a reliable, cost-effective and scalable network can be achieved with its help.

As a key component for DWDM and UW-WDM (ultra wide wavelength division multiplexing) optical networks, OADM is used for selectively dropping and inserting optical signals into a transparent DWDM network. We know that the main function of an optical multiplexer is to couple two or more wavelengths into the same fiber. If a demultiplexer is placed and properly aligned back-to-back with a multiplexer, it is clear that in the area between them, two individual wavelengths exist. This makes it possible for OADM to remove or insert individual wavelengths.

Configurations and Functions of the OADM

Figure 1: Components of a Traditional OADM

Figure 2: Configutation of OADM with TFF

Figure 3: Configuration of OADM with FBG

As the name indicates, an OADM can add one or more new wavelength channels to an existing multi-wavelength WDM signal, or drop/remove one or more channels, passing those signals to another network path. The OADM selectively removes (drops) a wavelength from a multiplicity of wavelengths in a fiber, and thus separating the signals from the particular channel. It then adds the same wavelength in the same direction of data flow, but with different data content. OADM is commonly used in WDM ring systems and in long-haul for more flexible configuration and higher capacity. 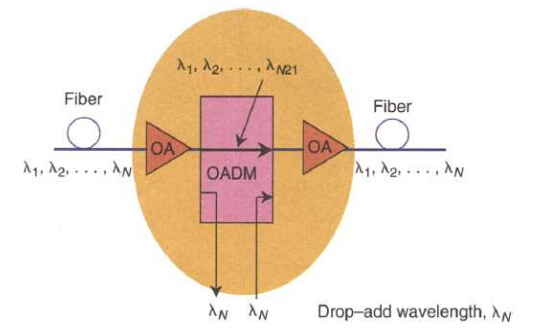 Figure 4: The Function of OADM

FOADMs were originally developed to improve the delivery of "express" traffic through networks, without requiring expensive OEO regeneration. FOADMs use fixed filters that add/drop a selected wavelength "band" and pass the rest of the wavelengths through the node. Static wavelength-filtering technology eliminates the cost and attenuation to demultiplex all DWDM signals in a signal path. The solution is called FOADM because the wavelength(s) added and dropped are fixed at the time of add/drop filter installation on the optical path through a node. No additional filters can be added without interrupting express wavelengths traveling through the node.

ROADMs were developed to provide flexibility in rerouting optical streams, bypassing faulty connections, allowing minimal service disruption and the ability to adapt or upgrade the optical network to different WDM technologies. It uses a Wavelength Selective Switch (WSS). The WSS has an 8-dimensional cross-connect and provides quick service start-up, remote cross-connect and WDM mesh networking. The ROADM scheme also allows inputting or outputting a single wavelength or wavelength group via the fixed port. In ROADM systems, we don’t need to convert the optical signals to electrical signals and route those signals by using conventional electronic switches then convert back again to optical signals just like FOADM does. ROADM can configure as required without affecting traffic. 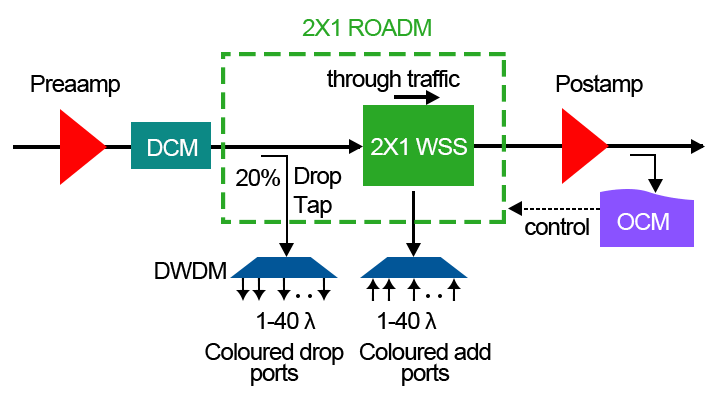 Figure 5: The Principle of ROADM

In conventional long-haul transmission systems, emphasis has been placed on how much capacity and how far the system can transmit. In metro/access networks, however, low cost and system flexibility are strongly required. OADM canverify both demands. The main battlefield of OADM application is in MAN (metropolitan area network), featuring high flexibility, easy upgrade and amplification. As an ideal multi-services transport platform in MAN application, OADM also allows different wavelength multiplexing signal at different locations. Another application for OADM is in Optical Cross Connection (OXC). Proposed equipment allow different network to connect dynamic, on-demand wavelength resources and a wider range of network interconnection. OADM and OXC only need to download the information in the nodes to send the person that handles the equipment, including ATM switchboard, SDH switchboard, IP router etc., which greatly improve the efficiency of the node to process information. 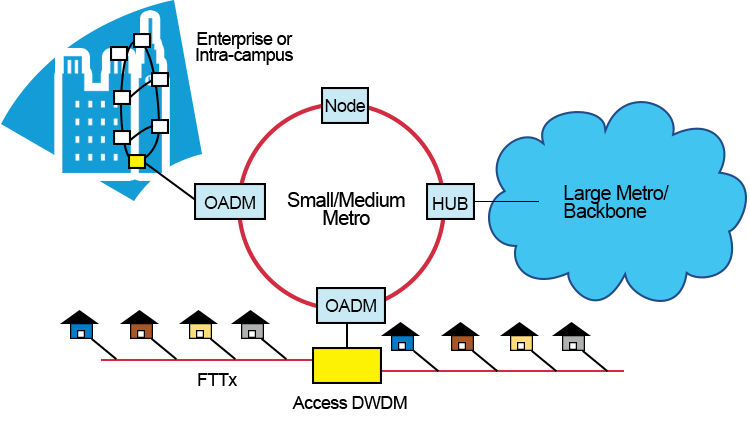 To reduce the cost in large-capacity transmission, whereas conventionally most signal processing has been done after optical-to-electrical conversion, it is required to process signals in optical form. And OADM is one of the key devices to implement such optical signal processing. Use of OADM makes it possible to freely add or drop signals with arbitrary wavelengths over multiplexed optical signals by assigning a wavelength to each destination. Moreover, it also help simplify the component configuration of optical amplifiers through reduced optical attenuation for the express channels - optical channels neither add nor drop at nodes - in OADMs, thereby decreasing the total cost of networks. OADM is still evolving - although these components are relatively small, it will play a key role in producing compact, monolithic, and cost-effective devices.